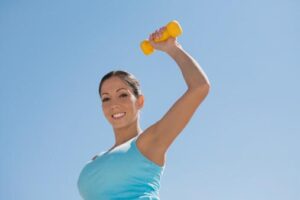 If you haven’t lost any of the pounds you swore to by swimsuit season, you might be tempted to throw in the towel and put off your dreams of weight loss till next year. However, there’s no time like the present to start eating and living healthier!

Look at the calendar: June is already drawing to a close. And if you have yet to start losing that weight you initially said you’d drop before swimsuit season, you’re in good company. Like many others, you may figure that there’s no point in going through the hassle of beginning a new fitness regimen at this advanced date. After all, it’s too late to start making a difference in your weight or your shape this summer, right?
Wrong, says Dr. Lavinia Rodriguez, a clinical psychologist who is trained in treating eating issues and weight problems. In fact, there’s never been a better time to start losing weight.
“Many people assume that because it’s already the middle of the summer, they’ve missed their opportunity to achieve their weight loss goals,” says Rodriguez, author of Mind Over Fat Matters: Conquering Psychological Barriers to Weight Management (iUniverse, 2008, ISBN: 978-1-4401-0228-8, $14.95). “The truth is, though, they haven’t.”
It’s a common issue: summer has a way of sneaking up on all of us. During chilly March, bare arms and legs are probably the last thing on your mind—and if your summer shape does cross your mind, you figure that you’ve got three whole months to work on things. April rolls around, but you’re still not feeling the urgency; after all, there are still two months to go! And then suddenly, you have an “Oh, crap” moment. Because somehow Memorial Day weekend has come and gone, and you haven’t even started working on your summer weight loss goal. At this point, you think, Well, heck. I missed my chance. Now, the game becomes avoiding the pool, and trying (unsuccessfully) to force your summer clothes to conceal your love handles as well as the winter ones did.
“I know that as you stare July in the face, it can seem like you’re past the point of no return in the summer weight loss department,” concedes Rodriguez. “However, I urge you not to let an ‘It’s too late’ feeling keep you from working toward those goals you set in March. For one thing, it’s always a good time to get healthier. But more to the point, summer practically rolls weight loss opportunities out on a silver platter. Instead of seeing this as the end of your pound-shedding aspirations, you should look at it as the beginning!”
It’s true. Although you might not see it now, there’s never going to be an easier time to start the journey toward looking and feeling your best. To start changing your attitude and your strategy, read on for some of Rodriguez’s tips:

Take advantage of the great outdoors. 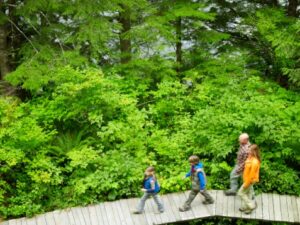 All right, so maybe the prospect of exercising is never going to make you drop everything, jump up and down, and squeal with glee. That said, it doesn’t have to be torture, either—and let’s face it, the setting in which you work up a sweat can make a huge difference in whether or not a fitness habit takes hold. Which would you choose: a cluttered, stinky gym, or a green, open park? “Summer is the perfect time to really make exercise a part of your daily routine,” Rodriguez points out. “For one thing, the weather is warm, so outdoor exercise is much more fun—especially in the milder mornings and evenings. Also, the days are longer and sunnier, so you’re probably in a better mood than you would be in the depths of winter. Lastly, there’s a much smaller chance that you’ll be knocked out of commission by a sore throat or runny nose. Remember, there is no better fat burner than an active lifestyle!”

Let your summer diet work for you. 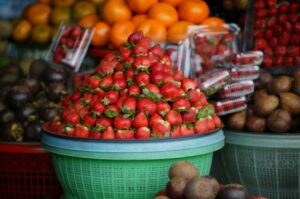 To a large extent, the weather outside determines what goes into our mouths. During the colder months, fresh produce is more limited, and we instinctively gravitate toward more substantial (and fattening!) comfort foods like casseroles and fried dishes to warm us from the inside out. Simply because of the menu, starting a successful weight loss program in the winter can be doubly difficult. “However, the opposite tends to be true at this time of year,” Rodriguez explains. “It’s hot outside, and there are so many delicious fruits and vegetables available in the grocery store and at farmers’ markets. I don’t think anyone believes that a slice of watermelon and chicken straight off the grill will go to your hips and stay there—quite the opposite, in fact. And the best news is, you’ve still got two or three months of summer eatin’ left.”

Wear those shorts anyway!
It might sound counter-intuitive at first, but forcing yourself to wear weather-appropriate clothes in public—regularly—will probably help your self-esteem, not hurt it. Chances are, you’re your own worst weight critic, and once you realize that your bare arms and legs aren’t causing strangers to gape, you’ll realize that things aren’t as dire as you made them out to be after all. “When you see yourself—and your weight loss—as an utter failure, it’s much harder to work up the motivation to try to turn things around,” says Rodriguez. “Admit it—you’ve probably had that ‘What’s the point?’ moment, and decided to throw in the towel. However, if you realize that you’re normal, changing your health habits isn’t quite as daunting.”

Acknowledge the flaws of fad diets.
Despite your initial impulses, it’s important to avoid the temptation of turning to fad diets. Be honest: if you’d actually started Mission Swimsuit in March like you’d initially planned, you’d have probably jumped on board with the latest miracle diet that promised to melt the pounds. Maybe you’re still tempted to do so. However, points out Rodriguez, fad diets usually aren’t healthy, and they’re not a long-term fix. “The body can’t lose fat as quickly as many people expect it to, so these rigid diets actually promise something your body isn’t built to deliver,” she explains. “Furthermore, they cause psychological deprivation: your mind feels deprived and becomes preoccupied with the foods you’re avoiding. So even if you trick yourself into thinking that subsisting on celery and kale is a good idea because there are still six weeks left in summer, you’ll be back at the drive-through window sooner or later—and any temporary success you experience won’t last.”

Be aware of the dieting company you keep.
In many ways, our society revolves around eating. We have working lunches, dinners with friends, and coffee dates, just to name a few. And even if you don’t realize it, chances are you tend to mirror the eating habits of the people you spend the most time around. “I’m not saying you need to completely avoid folks who constantly have their hands in a bag of chips,” Rodriguez says. “Just be conscious of your hands if they also start straying toward the snacks. Ideally, try to schedule non-food-centric time with friends who tend to get you off track…or offer to host and prepare the meal yourself! After all, the weather’s perfect for cookouts and dining al fresco.”

Lose weight like you brush your teeth.
In order for weight loss to be effective and lasting, it has to become a lifestyle, not a temporary task. (And as we’ve already established, eating well and exercising are most easily accomplished now!) Essentially, says Rodriguez, you’ve got to stop worrying so much about the results and focus on the process. “Losing weight ought to be like brushing your teeth,” she explains. “You don’t get preoccupied by what the toothpaste and floss are actually doing to your teeth. You just trust that if you perform healthy behaviors, you’ll get the desired results. It’s the same with losing weight—if you focus on the behaviors of eating well and being active, the body will take care of the rest.”

Nix the “now or never” notion.
Yeah, the necessity of appearing poolside in your bathing suit can definitely give you weight-loss tunnel vision. However, it’s important to remind yourself that getting fit is primarily about long-term health, not about looking svelte in a bikini. “No matter what season it is—or when the pounds actually start to drop off—the bottom line is that you’re doing yourself an immense favor by choosing to change your lifestyle,” Rodriguez asserts. “And look at it this way—even if you’ve barely dropped one pant size by Labor Day, you’ll continue to progress if you stick with the habits you started earlier in the summer. Come next June, you’ll be thanking yourself for kick-starting new habits now.”
“So you see, the summer is not lost after all!” Rodriguez concludes. “You can start to look at the big picture (the rest of your life) and take one step at a time toward permanent weight loss and fitness. Remember, it doesn’t matter how you do it or how long it takes you to get to the finish line—as long as you do. So get out there and start instituting a new set of fitness habits. This summer can be the beginning of a leaner, healthier you!”

About the Author:
Dr. Lavinia Rodriguez is a clinical psychologist and an expert trained in treating eating issues and weight problems. For more than 30 years, she has observed how people set themselves up for failure through unrealistic diets and exercise programs, as well as through buying into out-and-out scams designed to take advantage of individuals who seriously want to improve their health and lives. She is concerned about people being misled regarding the most effective ways to lose and manage weight over a lifetime.

Over the years, Dr. Rodriguez has treated many people, has written articles on the subjects of eating disorders in particular and weight loss in general, and has written a book titled Mind Over Fat Matters: Conquering Psychological Barriers to Weight Management. For more information, please visit www.fatmatters.com.

About the Book:
Mind Over Fat Matters: Conquering Psychological Barriers to Weight Management (iUniverse, 2008, ISBN: 978-1-4401-0228-8, $14.95) is available at bookstores nationwide and through major online booksellers.